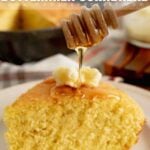 Delicious and easy cast iron skillet buttermilk cornbread made with yellow cornmeal and buttermilk. This cornbread is the perfect side to chili, stew, and soups.

This incredibly easy recipe is made in just one bowl and then poured into a sizzling hot skillet and baked to a beautiful golden brown.

With simplicity in mind, this recipe for skillet buttermilk cornbread is made with simple ingredients that are commonly found in the pantry.

It’s a classic southern recipe and a southern staple that has been enjoyed for many generations and can be found on the table at family get-togethers and feasts. Not just great for dinner, homemade cornbread is a great addition to the breakfast table.

It doesn’t take much effort to make this cornbread as everything is mixed together in one bowl and then poured into a hot cast iron skillet and allowed to bake.

This recipe is easy to clean up and doesn’t dirty a lot of dishes. Everything is mixed in one bowl and poured into the cast iron skillet for baking. That’s it!

This recipe doesn’t take long to bake in the oven and in less than 30 minutes, it’s the perfect side to serve with a bowl of chili.

This skillet cornbread uses basic and common ingredients. Honey, butter, or your favorite jam are perfect toppings to pair with this classic cornbread recipe.

TIP: A honeycomb wooden dipper stick is a great tool for serving honey.

How to Make Skillet Cornbread

The first step to success in making cornbread in the skillet is to make sure that the cast iron skillet is oiled and hot before adding the cornbread batter into it.

Heating the skillet beforehand will result in a nonstick cornbread that easily lifts out of the skillet and get a beautiful golden crust.

Prepare the cast iron skillet- Add 2 tbsp of vegetable oil to a cast iron skillet and add it to the oven. Preheat the oven to 450 degrees and allow the skillet to get hot while preparing the cornbread batter.

Prepare the cornbread batter- Using a whisk, combine the yellow cornmeal, the all-purpose flour, granulated sugar, and baking soda together in a bowl. Add 1/2 tsp of the salt into the mixture at this time and reserve the 1/4 tsp of the salt for the skillet.

Pour the buttermilk into the center of the cornbread mixture and whisk until smooth. Add the eggs one at a time until smooth.

Melt the unsalted butter in the microwave and then add it to the mixture. Stir until combined.

Sprinkle the remaining quarter teaspoon of salt into the hot skillet.

TIP: Add a trivet to the counter for safe handling when adding the cornbread batter to the hot skillet.

Leaving the cornbread in the skillet will cause the bottom of the buttermilk cornbread to darkly brown and alter the flavor.

The cast iron skillet will be very hot when it comes out of the oven. Protect hands and counters when handling the hot skillet.

Why put salt in skillet 🍳 before pouring batter? This is regarding skillet cornbread.

This is something that I have always done but you can skip this step if you wish. I add it as a way to season the bottom of the cornbread and to give it flavor.