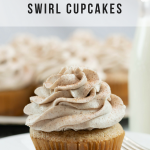 This Vanilla Cinnamon Sugar Swirl Cupcakes recipe is often requested for social gatherings.  These cupcakes are light, fluffy, and full of cinnamon deliciousness.

After all these years of making different types of cupcakes, these are the ones people remember!  Surprisingly easy to make, these cupcakes don’t disappoint!

You will find real cinnamon throughout the cupcake.  Swirled inside the cupcake itself and generously mixed into the buttercream frosting. By adding a light dusting of cinnamon on top of these cupcakes, it gives it a beautiful finishing touch.

The Right Amount of Cinnamon

Cinnamon can be tricky – sometimes you can add just too much and it’s overwhelming.  Certainly, this is not the case with this recipe.  Although it has cinnamon spice throughout the cupcake, it is more subtle than overpowering.

Also, making and baking these cupcakes will awaken your senses with the enticing scent of vanilla throughout your home.

To create the delicious cinnamon flavor in these cupcakes start by lining your cupcake pans.  Once they are lined, scoop 1 TBSP of batter into the liners and top it with 1/4 tsp of the cinnamon-sugar mixture and repeat the steps until the cupcake liners are halfway full.

Bake the prepared cupcakes in the oven for 16 to 18 minutes.  There should be minimum crumbs when inserting a toothpick into the center of the cupcakes.  Allow these cupcakes to cool completely before attempting to frost them.

If you frost them while the cupcakes are still warm the frosting will melt and slide off the cupcake.  Be patient!

How To make Vanilla Cinnamon Cupcakes

Mix the dry ingredients– Mix together the flour, cinnamon, granulated sugar, baking soda, and baking powder together in a bowl.

TIP: A hand mixer is a great kitchen tool to quickly make your cupcake and cake batters.

Repeat these steps until the liners are halfway full. Top off the cupcake batter with a little more cinnamon sugar.

Allow the cupcakes to cool completely before frosting.

Spruce Up Your Cupcake

I believe that making a cupcake shouldn’t be difficult.  A cupcake can easily be made by baking a vanilla cupcake and frosting it with buttercream.  Well, that’s how simple this recipe is!  It’s an extra step for the cinnamon – it’s as simple as that.

These cupcakes don’t take a lot of work but they succeed in elevating your everyday cupcake.  No one will even know how little work it took to make them.  😉  Additionally, they’re a lot of fun to make and they definitely spark creativity.

A Favorite to Those Near and Dear

My mother requests these Vanilla Cinnamon Sugar Swirl cupcakes for her birthday every year.  In fact, she doesn’t even have to ask, she just expects them.  They’re a real treat for friends and loved ones, they’ll love them so much they’ll request them time after time!

I’d had a lot of great feedback on Pinterest from those who have tried this cupcake and absolutely love it!  In fact, they make it for special occasions, too!

Wait until cupcakes are completely cool before frosting.

This recipe is easily doubled and the frosting recipe is great on other cupcake batters as well!

Tip: If you want cupcakes with tall frosting, prepare 2 batches of frosting.

Like this recipe? Check out my Caramel Drizzled Brown Sugar Vanilla Cupcakes!

I am so excited to give these a try! These cupcakes look delicious! Thanks for the share!

My niece is going to celebrate her birthday this coming month, and this is a perfect gift for me to give her as she loves cinnamon cupcakes so much. It looks delicious!

I hope she absolutely loves them! :)

Hi!I am 12 and I made this recipe. I had changed a few of the ingredients due to improvisation but they turned out very yummy. Instead of using sour cream, I used 1/2 cup of mayo. I know that sounds weird but you could barely tell. With the cinnamon and sugar mix I swirled it into the individual cups to make it have a swirly look and the cupcakes turned out like a baked good version of cinnamon toast crunch. I recommend trying this recipe. :)

Mayo is great in cakes! It creates a very moist texture. Chocolate mayonnaise cake is a fun cake to give a try. :). Thank you for sharing your experience and I'm very glad you liked the recipe!

Any change you could sub cream cheese for the shortening in the frosting?

You can! It will be Cream Cheese Buttercream Frosting and it would be really good with these cupcakes. :)

Didn’t work for me. Why did they get stu k to the liners?

There could be a few reasons. One could be the types of liners you are using. Or, the liners could have been overfilled or the cupcakes could have not been cooled long enough to peel away from the wrappers easily.