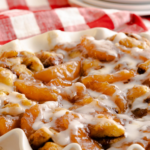 This apple cinnamon roll bake is a great overnight breakfast and comes together in just a matter of minutes before going into the oven.

A can of cinnamon rolls makes this quick breakfast quick and easy to make. It only takes a few ingredients to make and they’re all commonly found in the pantry.

To make a cinnamon roll bake only a can of cinnamon rolls, butter, cinnamon, and brown sugar is needed. The ingredient that makes a huge difference in making a breakfast casserole such as this is choosing a fruit pie filling.

For this recipe, apple pie filling is used because the flavors pair so wonderfully with brown sugar and cinnamon.

Simple ingredients are used to make this apple cinnamon roll bake and the apple pie filling can be swapped out for other fruit fillings!

Prepare the dish- Grease the dish with nonstick cooking spray and set aside.

Add 1/3 of the brown sugar to the top and spread it evenly.

Measure half of the apple pie filling to the dish and stir to combine the cinnamon roll dough with the apples.

Press the dough down into the dish.

Sprinkle 1/3 of the brown sugar on top of the mixture.

Spread the remaining apple filling on top of the mixed dough.

Sprinkle on the remaining brown sugar.

Bake the apple cinnamon roll bake- Bake in the preheated oven for 40-45 minutes. Check the center once the time is up to see if the center is done. If not, bake for a few minutes longer.

TIP: To make it overnight, prepare the dish according to directions, and before baking, wrap tightly with saran wrap and place it in the refrigerator. Cook the next morning and drizzle the icing on top of the warm apple cinnamon roll bake when serving.

You can get creative and change up the flavors any way you would like. Blueberry, peach, and even strawberry pie filling would take great in this breakfast casserole.

During the Fall and Winter seasons, just a pumpkin pie filling would certainly create a warm and cozy breakfast.

A 1.5-quart casserole dish is needed to make this apple cinnamon roll bake. You want the chopped cinnamon roll pieces to completely cover the bottom of the dish so that the ingredients bake together and create a dense but flavorful casserole.

Anything larger than the 1.5-quart dish will create gaps and space and the casserole will bake much thinner than using the specified dish.

How to make this with fresh apples?

Wow this was great. I backed off the brown sugar a bit and topped it with chopped pecans. Definitely going to be making this often. Love you can freeze and bake later!!!

Anyone try this with some nuts on top?

This bake was so delicious! I intended it to be for dessert, but it ended up getting eaten for breakfast!

A lot of apple recipes this fall season and I can't wait to try this. Thank you!