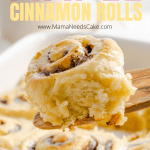 These gooey homemade maple cinnamon rolls are made from scratch and with real maple syrup.

Topping these cinnamon buns is a creamy and smooth maple flavored icing.

The first step in using yeast to make sure that it is still alive. Using expired yeast will result in dough not rising.

A quick and easy way to make sure that the yeast is active is by adding the warm milk and the sugar to activate the yeast. Make sure the milk is not too warm, your goal is to reach 110°F.

Once it gets frothy it is time to start adding the other ingredients.

Before making these maple cinnamon rolls ensure that you have active yeast!

Once the ingredients are well combined and the dough has been kneaded, it’s then time to cover the bread in a greased bowl and set it in a warm place and allow it to rise for 1 hour.

In that one hour, the dough will double in size and then it will be time to roll the maple cinnamon roll dough out and proceed to the next step.

PROOFING THE DOUGH IN THE PRESSURE COOKER!

Pressure cookers aren’t just for pressure cooking food!  They also work to speed up the process of proofing dough!  I put my dough onto parchment paper, place it down in the pot on the trivet and place a plate on top of the pot.

I press my yogurt button and set it 30 minutes.  Voila!

The dough for these maple cinnamon rolls has proofed in half the time the traditional way!  It’s also a great way to proof dough if your house is cool and drafty.

Once the dough has been proofed, it’s then rolled out into a long rectangular shape. The filling is then spread evenly over the dough while leaving an inch around the dough bare.

It’s then rolled starting at the shortest side and rolled completely up.

It’s then sliced into 12 rolls and placed into a greased 13×9 baking dish.

It is then covered and allow to rise for another 30 minutes before placing the maple cinnamon rolls n the oven.

My mouth was watering reading this recipe! Love anything maple...I'll try these!