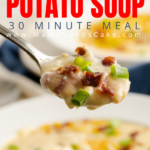 This cheesy potato soup is an Outback Steakhouse copycat and ultimate comfort food. Made from scratch and a better for you replica of the original.

Although this cheesy potato soup isn’t healthy for you as it is considered comfort food, it doesn’t have a lot of extra unnecessary added fat and oils that most restaurants add to their dishes.

Yes, that makes them delicious but you can make replicas of your favorite restaurant recipes at home that are better for you!

This Outback Steakhouse copycat potato soup will satisfy your cravings for the restaurant favorite.

Making potato soup on the stove top is simple to do and it’s all in one pot! That means less clean up and more convenience- yes, please!

Cut the bacon into small pieces and cook them over medium-heat in a large pot or Dutch Oven. Once the bacon is browned, remove the pieces from pot and drain them on paper towels.

Leave two tablespoons of bacon grease in the pot and add the diced onions, garlic, and butter.

Cook until the onions are translucent then sprinkle the flour into the pot. Whisk the flour to combine with the other ingredients.

Chicken broth is then added into the pot or Dutch Oven, along with the cubed potatoes, half & half (or heavy cream).

Cream of chicken is added to this recipe but it can be left out if you wish.

Salt and pepper are then sprinkled on top.

Allow the mixture to boil for 10 minutes and then reduce the temperature to a simmer.

Allow the steam to escape while blending so that it doesn’t build pressure and cause the liquid to explode under pressure.

Add the pureed soup back to the pot or Dutch Oven and stir in the cheddar cheese and mix to blend well. The cheese simmering with the cream will create a creamy cheesy potato soup.

Add the bacon back into the soup and simmer for another 10-15 minutes, stirring occasionally.

Garnish this soup with scallions, chopped bacon, and sour cream.

YOU MAY ALSO LIKE: Spinach and Cheese Ravioli Skillet

It’s made with the same delicious ingredients but without the need to stir the pot! The recipe for the Instant Pot version is here.

This soup was delicious! It will definitely be on my regular rotation of recipes. Thanks so much for sharing.