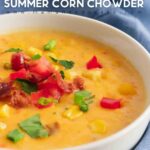 This summer corn chowder is pressure cooked in white wine to bring out of the flavors of the fresh vegetables and to elevate this very simple but delicious dish.

Fresh garden vegetables are used to make this corn chowder but even if you don’t have a garden you can purchase fresh vegetables at the grocery store. Opt for fresh, not frozen, for maximum flavor and freshness in this recipe.

How to make Summer Corn Chowder in the Instant Pot

The first step to making this Instant Pot Summer Corn Chowder is to set the Instant Pot to saute and cook the bacon.

This is also a good time to prepare your corn by removing the husks and the silks from the corn and to remove the corn from the cob.

The bacon is cooked until crispy and it is removed from the inner liner. Your will want to keep the bacon grease and add the olive oil to it. If you have more than 2 tablespoons of grease, discard the extra.

Chop the bacon and return half of it back to the pot. The remaining chopped bacon will be used for serving as a garnish.

While still on saute, heat the olive oil and the butter together with the bacon grease. Add the onion and garlic and saute until fragrant.

The next step is to add the corn, diced peppers, and the potatoes. The white wine is then added. Once it is added, deglaze the bottom of the pot to remove any stuck on bits of bacon.

Salt, pepper, and paprika are then sprinkled into the pot and the vegetable broth is poured in on top of the other ingredients.

The Instant Pot is then set to MANUAL/PRESSURE COOK for 10 minutes.

*Refer to your pressure cooker’s manual for how to safely perform it’s functions.

Once the ten minutes is up, carefully perform a quick controlled release (QR) by carefully and intermittently releasing pressure from the pot.

Carefully remove the lid from faces and prepare to blend half of the corn chowder.

This can be done in two ways:

Immersion blender – to use an immersion blender, plug it in and place it into the center of the corn chowder. In quick short bursts, blend the soup. You only want to have half of the soup blended so just a few quick bursts should do the trick.

Once blended, carefully return the hot corn chowder to the Instant Pot.

Sir together the heavy cream and the cornstarch before pouring into the corn chowder.

Allow the corn chowder to thicken and then serve the Instant Pot Summer Corn Chowder with the reserved chopped bacon, chopped scallions, tomatoes, and fresh parsley.

*Refer to your pressure cooker’s manual for how to safely perform its functions.

If using a countertop blender, make sure to leave the top vented so that the hot corn chowder doesn’t build up pressure and cause spurting.

You can opt out of using white wine - just simply leave it out! There’s enough broth so you don’t need to substitute it for anything.