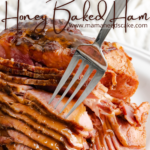 Save money by making your own delicious Honey baked ham at home and use your Instant Pot to create it!

Honey baked ham from the famous store can carry a hefty price tag but you can buy a spiral cut ham for much less. With some basic spices mixed with honey, butter, and sugar you can make your very own at home with little effort.

The time it takes to pressure cook a ham depends on the size. As long as you can fit the ham in your Instant Pot and can close the lid with clearance, you’re good to go! Keep in mind, a sling is perfect to help raise the ham out of the inner liner once it is done cooking.

If by chance you can’t fit the ham comfortably in the Instant Pot, don’t worry. Trim off excess from the ham in order to make it fit into the pot. Remember, leave enough room on the top to easily close the lid and lock it.

To pressure cook a pre-cooked ham, add 2 minutes per pound to the pressure cooking time as well as 10 minutes to the overall cook time. This will heat the ham up thoroughly.

A ten-minute natural release time is done on the honey baked ham. This step is important because if a quick release is performed then it will suck the juices out of the vent and the result will be dry and less flavorful.

A precooked spiral cut ham is ideal when making this recipe so the glaze can get down into the nooks and crannies of the ham and make the ham flavorful throughout.

To make Instant Pot Ham you need just three things to make a flavorful and delicious Honey Baked Ham. Aluminum foil to wrap the ham to keep heat and juices in, a silicone sling (or one made out of foil) to lower and lift the ham out of the Instant Pot, and the Instant Pot itself.

There’s no need for an oven for this Instant Pot Honey Baked Ham and it only takes two minutes per pound plus 10 additional minutes no matter the amount of pounds that are being pressure cooked.

In the first step, the butter, sugar, and honey is melted together. Once it is all melted together, the salt, cinnamon, nutmeg, ginger, cloves, and paprika are added into the melted mixture.

Aluminum foil is placed under ham and folded up the sides to prevent any liquid from leaking out from around the ham.

The melted liquid is then drizzled over the ham and also drizzled down between the slices of the spiral cut ham. Any remaining liquid on top will get rubbed into the ham. Once all of the honey mixture is used, more aluminum foil is added on top of the ham to seal in the moisture.

After the lid is removed, use the sling to remove the ham and drain the water from the inner liner. Place the ham back into the pot and remove the aluminum foil from around it to allow the liquid to settle into the bottom of the liner.

Set the Instant Pot to sauté and mix together the water and the cornstarch together before pouring into the pot. Allow the ingredients to combine and press Cancel. The sauce will thicken and then it can be poured on top of the Instant Pot Honey Baked Ham.

*EXAMPLE: A 5 lb ham will take 10 minutes plus 10 minutes for a total of 20 minutes with a 10 minute natural release time.

Please refer to your pressure cooker manual for proper usage and directions.

I love a honey baked ham! I have never tried making it in my instant pot before, and not sure why! I will have to give this recipe a try!